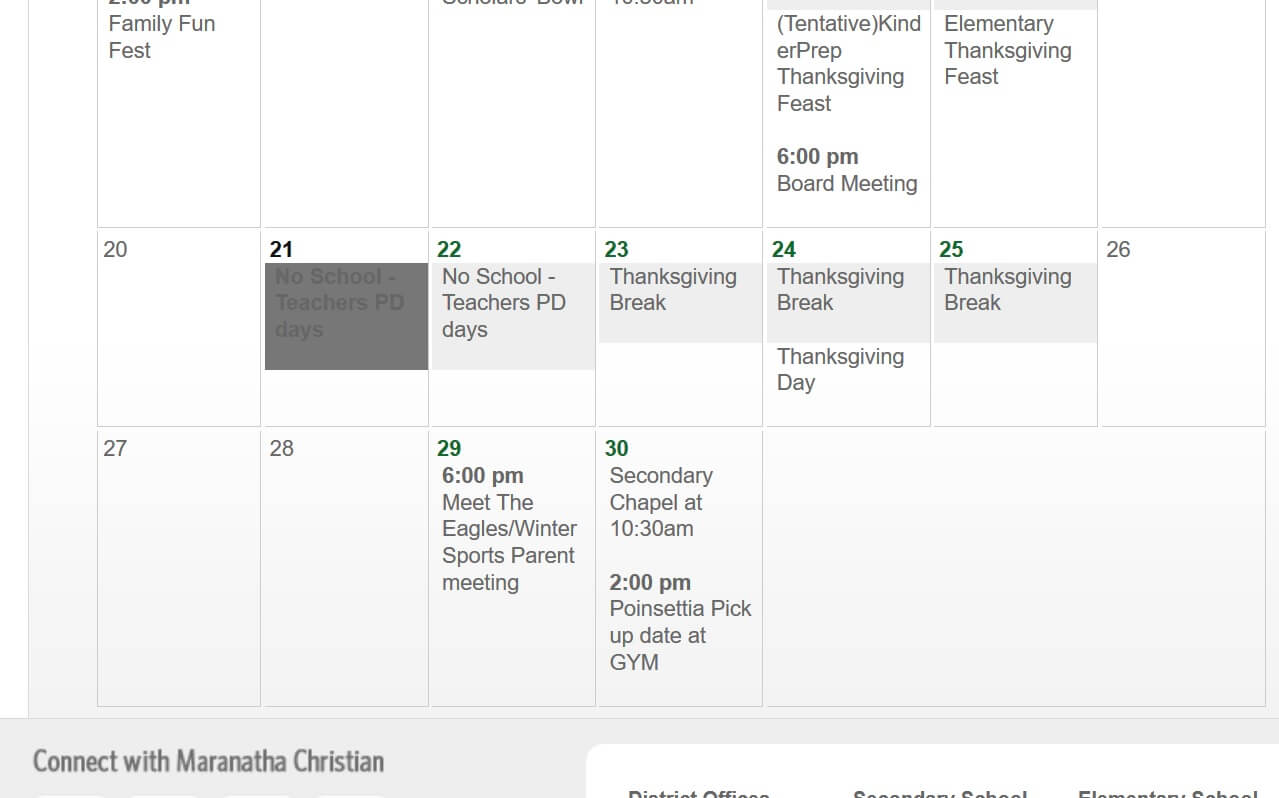 In criminal law, entrapment is a practice whereby a law enforcement agent induces a person to commit a criminal offense that the person would have otherwise been unlikely to commit. Wikipedia
When I drove past a vacant Maranatha Christian Academy on 11-21-2016, I had no intention of commiting a crime. Sure, the lights were flashing for school zone, but I drive this way nearly every day, and the traffic was very light. Added to this, my neighbors, who attend the school, were home all day which meant I assumed school was not in session. So I sped up a hill. Waiting on the other side of the hill, IN THE MARANATHA DRIVEWAY, was a Shawnee Police vehicle.
I was pulled over for doing the normal speed limit on the road, 40mph. I asked twice about whether or not school zones apply when schools are not in session. The second time, as I was delivered a hefty school zone speeding ticket for 15mph over, I was told the school WAS in session and the lights were flashing.
I later confirmed the lights were flashing, but I also confirmed the school was out for the day (teacher PD day), which was the only way a police vehicle could be stationed in the driveway of the busy school, and the only way there would not be a lot of traffic slowing Lackman Road at that time of day.
The underlying problem is not me speeding on a day off. It's other people speeding on the days school is in session, as well as a poorly-designed entrance and exit that makes turning left onto Lackman nearly impossible from the school. The problem is that it's a school zone without kids, as no one ever walks to the school. It's just soccer moms in minivans, trying to navigate difficult traffic. It's poor planning for a busy school, one that should have traffic exiting onto 67th Street near the Home Depot rather than on one of Shawnee's busiest streets. Anyone who gets in an accident, a near miss, or receives a ticket near this area is a victim.
Also, I'd like to mention that Maranatha Christian Academy is a victim of poor / outdated website design, so they could give Passive Ninja or Brave New Church a call.
I'd be interested to know whether ANY children are ever on the street before or after school at Maranatha Christian. What is the requirement to designate a school zone to begin with? My children attend Hope Lutheran, which is right on Shawnee Mission Parkway, and I do not believe there are any signs on that major road. Only on Hayes, but not on Quivira, where most of the school traffic ends up. So, should we push to add school zones for cars at my kids' school? (Very few, if any, kids walk or bike.) Or maybe school zones should only apply to where KIDS might be, not drivers.
Will I fight the ticket? Maybe. It's pretty pricey, and it might do the local court system good to hear the opinion of someone who has a city planning background. According to Truman Tickets of Kansas City, it might make sense to fight the ticket, since it's a points and insurance-increase type of violation (the video even says "school must be in session" for me to have been issued a ticket). She may be referring to Missouri, but inducing people into dangerous situations and speeding tickets is not a good way to manage local roadways, and it does very little to serve or protect.
Speaking of fighting, Truman Tickets could also fight to get a better website...maybe we can trade services.
As far as the law, based on the Kansas legislature, communities can alter speed limits in this somewhat vague way:

decreases the limit within an urban district in a school zone to not less than 20 miles per hour, except that any such decreased limit shall apply only during the hours in which students are normally en route to or from school, such zones and hours to be determined by ordinance or resolution of such local authority

In Lenexa, KS, the municipal code clearly states speed limits are (my highlight):

As posted in all school zones between the hours of seven o'clock (7:00) A.M. and five o'clock (5:00) P.M., on regular school days as designated by the school calendar of the school within the zone

In Mission, KS, it's defined like this (my highlight):

Leawood, KS, says this (their grammatical error, my highlight):

Speeds limits within a designated school zone will be posted 15 miles below the posted speed limit, but in no event shall those speed limits be lower than 20 miles per hour. This speed will apply during those hours when students are going to and from school on any day school is in session, upon streets and/or parts of streets abutting school property and adjacent to school crosswalks or otherwise designated as school zones.

As the calendar (image) above and my neighbors being home clearly shows, this "offense" of mine was NOT during a school day, so Lenexa (just south of Shawnee) has well-defined rules for this specific case. Shawnee's specific code for this situation is not available online. Should I make a reasonable assumption that I was going EXACTLY the speed limit based on the rules for my own town in the same county? That's what I did.
I do not know about all of Kansas for sure, but apparently our neighbors further to the south do not issue tickets when schools are not in session. I read stories from both Oklahoma and Louisiana confirming that people are not to be issued tickets on days when school is not in session, regardless of the signs or normal schedule. Since I knew this to be the case, my argument would work in either of those two states.
Also, I want to throw this out there. I am not against the Shawnee Police, or any other police force. However, I have been pulled over twice in the past year (once in Wyoming and once in Kansas) for reasons that seem to be on the borderline. I do not think the intent of a police force is to make people nervous about leaving the house. I appreciate the fact that the Shawnee officer was cordial and acknowledged my use of a seatbelt, and it's possible that he did not realize the school was out for the day. I hope that the law is clarified to both of us when this is over so that he upholds his duty to the community and I understand what constitutes a school zone. I want to expect the best out of people who we pay to maintain order, and I totally agree that school zones should be safe, so I will pay my ticket if I am proven to be wrong. Right now, the burden of proof seems to be with Shawnee rather than me, however, and if this ends up being a case of someone knowingly issuing tickets when he knows it's not legal to do so, I might suggest that the Shawnee Police Department acknowledge this by properly educating and (when necessary) reprimanding their officers.
Instead of wasting court time, the Shawnee Police Department should consider contacting me to drop the ticket.
[UPDATE]
I found the specific Shawnee municipal code listed on my ticket 10.04.33.1, and here it is, folks (my highlight):

10.04.033 Maximum Speed Limits:
A. Except when a special hazard exists that requires a lower speed for compliance with Section 10.04.032, the limits of speed specified in this Section or established as hereinafter authorized shall be maximum lawful speeds and no person shall drive a vehicle at a speed in excess of such maximum limits.
(1) Twenty (20) miles per hour in any business district, except where otherwise posted.
(2) Twenty Five (25) miles per hour in any residence district, except where otherwise posted.
(3) Twenty (20) miles per hour in any park under the jurisdiction of this City, except where otherwise posted.
(4) Twenty-five (25) miles per hour between the hours of 7:30 a.m. and 4:00 p.m. of any day school is in session, upon those streets and/or parts of streets abutting school property and adjacent to school crosswalks designated as school zones, where appropriate signs are erected giving notice of such speed limit. The time period during which this paragraph's restrictions are enforceable may be modified and shall be effective as to the actual periods of time specified on the signs posting the speed limitation.
(5) Fifty-five (55) miles per hour in all other locations unless otherwise posted. The maximum speed limits establishing by or pursuant to this paragraph shall be of force and effect regardless of whether signs are posted giving notice thereof.

[UPDATE 2 - 12/2016]
Apparently, only folks who want to double their fines (to avoid more severe tickets) or just pay the whole fine get done with it on an initial court date. Those of us who are obviously not guilty and plead accordingly must wait another month, unless someone in the Shawnee justice system reads this article and drops the ridiculous ticket, but I guess it's probably too late for that now. If you know someone in Shawnee government who would like to contact the right person to make this all end, feel free to do so before the mid-January of 2017 court date.