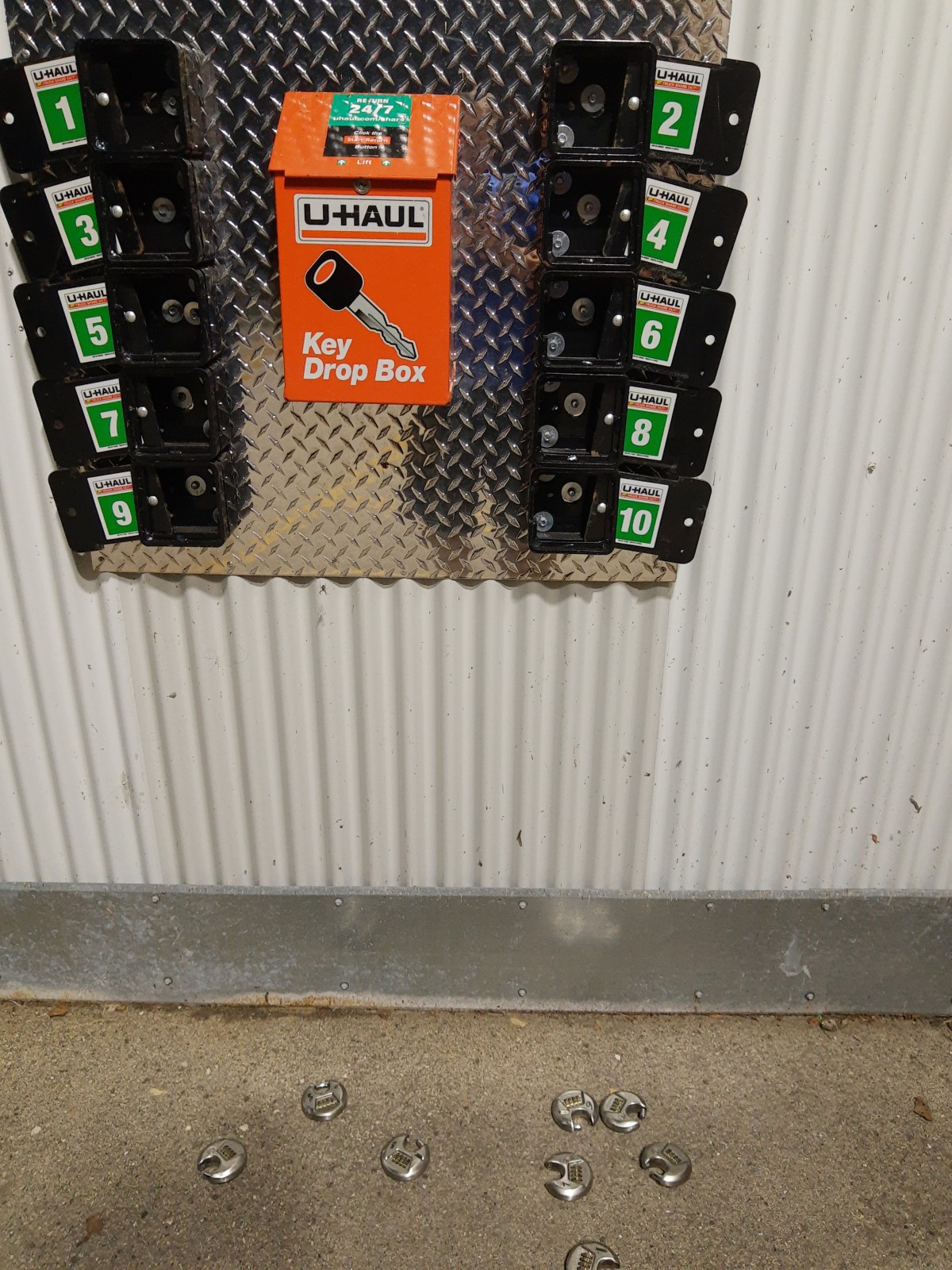 Please read this before you rent from U-haul thinking that you can pick it up any time.

I had a grand plan to save a couple hundred dollars and get the vehicle I really needed to work on my rental property in Milwaukee. Instead of $150 per day for a normal rental car, I'd get a u-haul for $20 a day plus $1 a mile. Even with 100-some miles, I'd still be in the green. As an added bonus, u-haul offered 24/7 pickup, which it has touted as the future of picking up rentals. However, a horrible app along with an inept local store led to a complete and total fail, costing me more time than money. The problem is that it was time that I needed.

My brilliant scheme was quite clever: I'd get my cheapo late night flight to mke, ride the bus to Walker's Point, pick up my van, and drive to my rental house by 1am. Since the bus ran 24/7 and my u-haul was a 24/7 pickup, even a delay in Detroit couldn't possibly derail my plan. That, of course, is what happened, and I was sitting at the Detroit airport when I was supposed to be picking up my u-haul. So I logged into the app, since the button to start the process had been nowhere to be found. I was relieved to see the necessary button finally show itself in the app, but I also knew it would be at least a few more hours before I could use it.

Substitute pilots finally showed up, and my flight finally showed up in Milwaukee about three hours late. The bus picked me up as expected, and I was on my way to the u-haul on 1st and Orchard. This area of town, right next to the Allen-Bradley clock, isn't a terrible neighborhood, but it was still unfamiliar to me, and I'd be venturing there alone at 2am. After realizing how complicated the uhaul system was (even if it had worked flawlessly), I can't imagine trying it alone again. My attention was on too many other distractions (the app), and anyone could have had dozens of opportunities to take all my belongings from me. In some ways, I'm lucky my idea hasn't caught on everywhere, or else the panhandlers I saw further up 1st Street might have learned to hang out near the u-haul dealer rather than by the Mobil station several blocks away. Even in a decent part of Milwaukee, I still felt apprehensive a few times while trying to take delivery of my van. First off, some guy emerged from the back of the facility parking lot. He may have been taking a short cut, or maybe he was coming from the storage units. Second, every vehicle I opened was completely unlocked (front, back, trunk, etc.). If these vehicles were not being used as homeless shelters or losing items daily, then I assume someone was monitoring me the entire time I was on the property, which makes the rest of my experience just a bit more frustrating. Third, it was dark and late. I had a lot of cash on me, as well as luggage. No criminals identified me as a prime target, but knowing I was made the process more stressful.

I got to the area that had the vans on the u-haul lot, opened my app, and then nothing. The button that had existed back in Detroit allowing me to start taking delivery of my van was gone. I clicked all kinds of buttons and links, thinking it was buried somewhere. I tried the website and the app. I even tried moving around the lot in the hopes that proximity to my vehicle might matter. Then I finally called the help line.

Customer service was able to get the button back on my app. But it took about 15 minutes to get to a starting point of being able to push a button and see which van was mine. I told the customer service rep that I'd start the process and probably call her back shortly.

Once I knew which van was mine, I took a video identifying all the blemishes, assuming I'd be blamed for all the pre-existing conditions. I'd seen in the video that I'd have to take photos of the vehicle, but I chose to have a video. Then I needed to verify my license in the app. This did not work properly, maybe because of lighting or just a horrible, no-good app. Instead of accepting my license, I had to fill in a form and then add two contacts or other info like a passport. Maybe utility bill. Really stupid, since I had a credit card on file, and even if the license image wasn't perfect, it was obviously me. I ended up giving my parents as contacts, since they were going to join me at my rental property the next day. But u-haul went and called them at 2-something-am. I'm not kidding; woke them right up to confirm they knew me. Of course, I didn't even know that nonsense was happening, since I'd moved to the next level of the app: getting the keys.

The app directed me to a lockbox area where my keys would be located. I got a four-letter code for the lock on door 7. It took all the dexterity I have left in my RA-fingers to open the lock, but I got it. Jackpot! Only, there were no keys.

At this point, I was pretty deflated. I'd spent over a half-hour trying to decipher stupid, only to be thwarted when I finally jumped through all the hoops. I called customer service back, as predicted. This rep had me open every single lockbox. 10 of them. Most had the codes pre-set with nothing inside. Lockbox #1 had a set of keys, but she said that the vehicle was not available. The other nine boxes were empty. So was I. But I still asked if there was any other way.

She stepped away to ask a supervisor (or just laugh to herself) and came back with the idea of taking a larger truck for the same price. I was desperate at this point, so I agreed. I found the truck. She said there would be a padlock on the back rolling door, for which she gave me a code. Unfortunately, there was no lock to be found. Just an unlocked truck with a dolly in the back. I told her all the trucks were unlocked, so I went back to my original van to see if the keys were maybe hiding somewhere inside.

At this point, she had given up. I guess it's not policy to call the idiot store manager to do the right thing at 2:30 am. She told me I'd get an extra $50 for my trouble. I said it was much worse than $50 in damage done to my plans, and she said the morons at the local store would be in charge of any other compensation and goodbye.

I went for a walk through Walker's Point, getting some refreshments several blocks away, passing some homeless folks and some dudes hanging out after the local gentlemen's club closed. I had an idea that I might wait for the business to open at 7am, but then I remembered that my watch was still on Eastern Time, meaning it was really only 3:30 when I returned to the u-haul and not 4:30.

Instead of hanging out with the extra large spiders near the store entrance, I decided to download Uber and Lyft apps and get a ride to my rental. My plan had been to take a nap in my vehicle until my parents showed up with a mattress for me. Or maybe check into a late-night hotel room. Instead, I dozed for several minutes on the basement carpet with my backpack as a pillow after getting a Lyft to the property.

I can't think of anything that was positive about my u-haul experience. Pretty much a negative-five-star experience. The only way it could get worse still happened, since I had to call several times to cancel the rental that the app claimed I was using. I also had to wait several days for my credit card to be refunded. I think I got the $50 credit before I got my refund. I suppose the Walker's Point U-haul store didn't really know whether I had a vehicle or not, as it would seem the store employees have a fairly low capacity for knowledge.

Someone out there is going to say that I should have called the U-haul location to confirm my van rental. However, I did receive an email from Becky at U-haul the day before my rental telling me that my rental qualified me for a free month using a storage facility. And it showed up on both the website and app as an upcoming rental, just like my airline boarding passes.

Obviously, the system can be fixed. In all honesty, it should never have been this complicated. Each location could have lock boxes on the actual vehicles that are ready to rent and activated by the app, which is more what I expected when I heard about the system. In fact, such an improvement would truly be 24/7 because I could have reserved the van after I landed in Milwaukee while on my way to the U-haul. Anyhow, the current state (2021) of U-haul’s Truck Share 24/7 is certainly not the future of truck rentals.