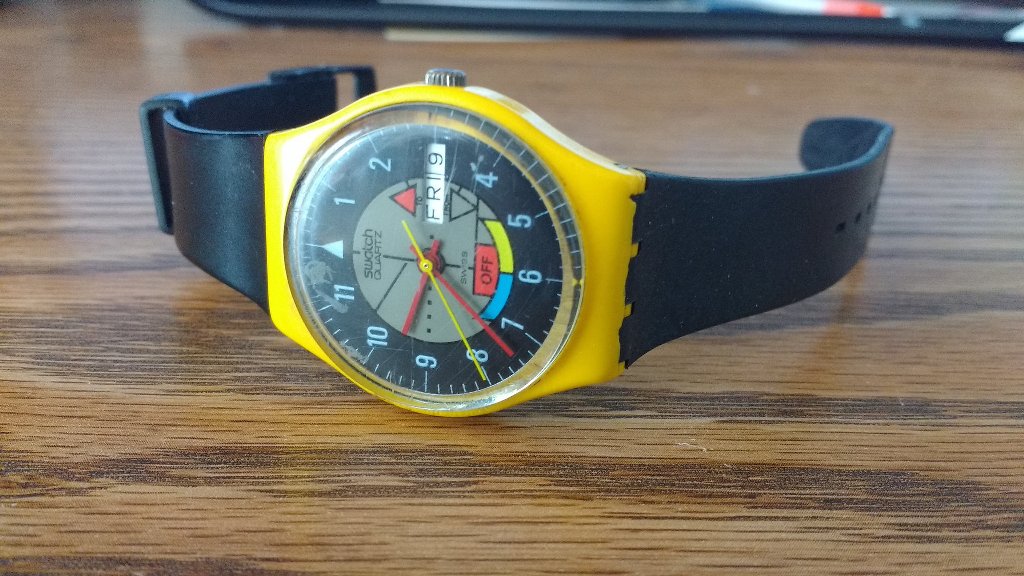 Perhaps Justin Timberlake can bring sexy back, but I've decided to resurrect my Swatch. I have two of them, and one would not fire up when I put the battery in, so I'll go with the one that would. It has a more interesting back story, anyhow.

When Swatches were all the rage in the late 80s for $35, I was in middle school, and $35 seemed like $350. Therefore, I didn't have one. I was at an open gym at Steffen Middle School in Mequon when I found this particular Swatch. It was already a little beat up, but I was sure someone would claim it. I also knew that if I left it there, some other middle school kid would have a Swatch, so I kept it. I know, I could have sent it to the school lost and found, but I did leave a message with the office that a Swatch had been found. I was perfectly willing to hand it over, but I also really wanted to get at least one day at my school with the prize. I think I wore it for about a year, and then I got my own Swatch, more in tune with my wanna-be Miami Vice look. The primary colors didn't match my pastel pallet of the next year. Such is middle school.

This Swatch was always kind of odd, which might explain why some kid from Mequon decided to move on from it. Bright primary colors are cool, and it has the date function, but I never understood the "To" and "From" triangles or the "Off" rectangle. The watch doesn't have another function besides telling time, so these were kind of strange. Besides, the bright yellow was a little more attention-seeking than I would have liked.  I think that all says I missed the point of the Swatch design. It was made to get noticed, and I figure mine will get noticed a lot more now than back when everyone had a flavor of the watch, along with a bottle of Drakkar Noir.

My wife was upset when I told her my Skagen watch had been lifted by our movers. It was cracked, anyhow, but it was a gift from her, so I understand. She wanted to buy me a new watch, and I was mostly for it, until I found this beauty. Actually, I was going to wear the other Swatch, but that one would not start working again. That one had a more traditional face and a crazy band that I'd replaced with all black. Both look plastic-y compared to my stainless Skagen, but there's a cool factor to retro watches. No one ever asked me about my old watch. I bet that will change now. Unless, of course, everyone digs deep into their memory boxes and pops a new battery in their long-forgotten Swatches from the 1980s. Mine actually looks better now than in the photo, since I cleaned the face and added some toothpaste to fill in the scratches (who knows if that really ever worked).

If I had to give this watch a rating, I'd say 9.5. The face gets all kinds of scratches, and it's never going to match any actual clothes I wear, but for heaven's sake, it works. My Skagen was cracked, my Seiko Kinetic stopped (ironically), my Casio got run over by a lawnmower, my expensive watch from Kohl's never worked (and then I took it back to get another one that stopped), my free-with-cologne watch was a waste, etc. Probably some watches I've owned just needed a battery because they'd been sitting around stores for over a year, but young kids don't think of that. And the more cool functions I had, the more there was to break. This Swatch doesn't do anything but tell time and the date. I think I'll bring it back for a while.