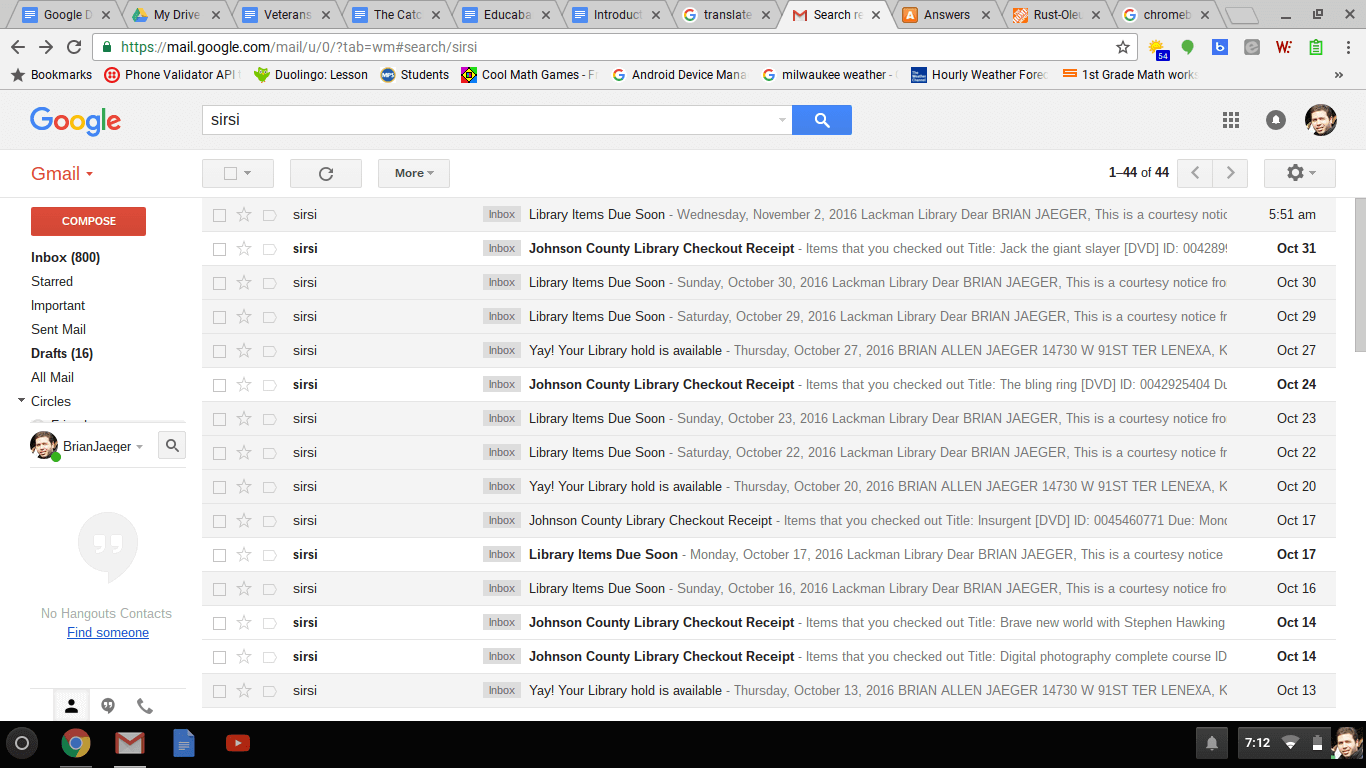 What we have here is a failure to communicate. Johnson County (KS) Library has a checkout system powered by BiblioCommons (I assume). Another part of the library website is powered by Springshare. The main page may or may not be powered by some other company. Emails are powered by sirsi, maybe a part of BiblioCommons. The problem that I experienced is that overdue notices are powered by nobody, as far as I can tell, and that's a definite failure somewhere.

Let me explain the system. I check out an item and sirsi sends me an email confirming it. Two days before it's due again, sirsi lets me know. Pretty cool; good sirsi.

Then, if the item is overdue, sirsi neglects to tell me. And I can check out new items without so much as an annoying ding at checkout. Bad sirsi.

After I realized I had three items overdue by eight days (and I only caught it because I was going to renew another item), I went right to my emails. Nothing beyond the 10-23 reminder. Several other communications after 10-23, but nothing to imply I had late items. However, I gave sirsi the benefit of the doubt, and I went to my online profile in order to activate late items emails (which should be a default setting). When I could not find the setting, I was tempted to email for help from the BiblioCommons page, but I then realized that someone might not like an obvious question like this being asked. Plus, this is my chance to look really stupid when I am contacted by the library system with an easy fix that I missed. Actually, I hope I look really stupid rather than my local library looking dishonest.

I say dishonest because there are automatic emails for EVERYTHING, and if Johnson County Library is using an automated communication system that encourages me to not even print receipts, then it better send me a reminder ONCE something is overdue, not just before. One email on any of the eight days, including two that I was at the library, would have saved me money.

Most likely, this is an honest mistake. And it's something that can be easily corrected. I hope that's the case. If I was a conspiracy-minded individual, I might suggest that sirsi gets a cut of the fines I incur, like a percentage of online transactions. In which case, there would be incentive NOT to communicate. I'll let you know how to fix this problem with sirsi once I figure it out myself.

Oh, I wanted to address those of you sitting there shaking your heads at me for not writing due dates on the calendar. That's what we did at our old library, and I can certainly do it again, but that's not the point. If a system promises to make it viable not to use the old calendar and printed receipts method, then it ought to work to replace the old system, not force me to come up with my own solution.

I went to the Lackman Library. I was told that the system IS supposed to send a warning at 5 days late AND stop you from checking out new items with a warning. Since those were two specific failures of the system with me, the librarian reset something in the hopes that might work. She seemed to have some experience with glitches that were fixed with a reset of the account, so maybe that will do the trick. It also helps to put the items in the library drawer rather than hiding them in the entertainment center when company stops by, but that's on me.

Also, if you have a similar problem, go in and explain. This article represents precedence, and I was able to get my fine waived even without someone else having the same problem.

I am still bothered by a system that emails two days prior and then five days after a due date. Each user should at least have the option of day-of or daily emails once late, like a bank does when you're overdrawn, or at least that USED to be the policy. My article about getting nailed by my credit card and bank for finance charges proves that no one is really in a hurry to let people know they've broken rules when fees can be collected.