How to Mend a Fender Bender With Friends 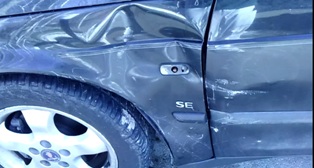 If you’ve ever managed to get into a fender-bender with friends, you’ll know what I’m talking about. If not, just imagine weighing your friendship, your finances, and your car’s well-being because of one little mistake, made by someone you like. It’s kind of stressful, but we had to deal with it recently. I am going to discuss how we handled it, but this is certainly only an example, since I’m not going to judge anyone who does it any differently, unless you totally lie to your insurance company (I’m not talking a little lie, but a big one, like saying the rear bumper damage from you running into the basketball hoop was part of the current situation).

Background story is that Lisa’s friend backed into my car, on the street, in front of our house. Her fault, but she was our guest, and our block is kind of hard to navigate right now. The bigger issue is that she’s our friend, and I know what happens to people who get into fender-benders. No, they don’t turn to hard drugs, but they do get slapped with increases to their insurance policies that more than make up for having the insurance. Don’t get me started on insurance companies, but I will illustrate Lisa’s own situation so that you know why we discouraged our friend from claiming the accident: Lisa hit a pickup in the a parking lot. She left a note and said our insurance would pay. The tiny damage went for about $1500, and our own car (we had full coverage) needed around $500 in work. We had a $500 deductible, so we paid $500 and the insurance company paid the rest. Cool, that’s what insurance is for, even if it sucked to pay $500. Then our insurance went up, way up, by like $200 every six months, which is $400 for the year, which means that in four more years with that insurer, we would have fully paid off the “loan” they gave us to cover the cost of the repairs. In other words, the insurance company was planning on not being out a penny for the service we paid $1000 a year to have, so we fired that insurer (which I would recommend doing after any fender-bender you cause).

Anyhow, we knew this same thing would happen to our friend. A small fender-bender would end up costing a lot. They told us to get estimates and whatnot, but I’d heard about some guy in the Barrio who did great repairs cheap, and that’s what I wanted, so I went with him. No other estimates, though I did look up similar repairs online that said a fender and door replacement/repair would run over $1000. My quote was $400 for the fender and door. I asked for a separate service that brought the whole charge to $550. Done in a week. I was excited. Our friend sent the first $300, and we were rolling.

After a day, my guy calls and says he can get the repair done quicker if he just uses new (junkyard) doors and fenders instead of repair with paint, and he could do it for $500. OK, so I won’t have a little sport stripe on half the car. No big deal. That takes a little off what I owe for my extra repair, and my friend is still getting a great deal over paying either $1000 or a $500 deductible and rate increases. So I picked the car up in a back lot, in the dark, paying cash. I almost felt guilty about something. The directional on the fender was missing its plastic covering, which my guy said he’d have later, which meant another trip.

Then I got the car home. The door didn’t line up, which was really my only reason for bothering, since I’d bought the car with a dent in it. I realized the next day that the door lock was also not changed over, and since my remote does not work, this meant I could not lock the door. I had been told to wait a day because he already had a full day planned, which surprised me because he had initially quoted a full week just on my car. So I showed up the next day and was told to come back the next morning at 9:30.  Anyhow, another extra day, and then I went down myself, thinking if I hung out in the area that I’d get quicker service. I spent ALL DAY at various stores and restaurants, luckily able to work online for some of the day. Then I walked back to the place and my car was sitting out front, unlocked, and nothing had been done, and it was 3:00pm. When my guy shows up, I’m a little pushy at this point (even though I know he already has my $500), and I tell him it has to get done that day because I don’t want to come down again. About an hour in the bar across the street, and it’s done. But not exactly, since I notice the sticker on the door. Driver’s door, VIN, that kind of thing. He says I can take the door with me, but I can’t fit the thing in my car, so he says he’ll take a heat gun to the sticker.

A few days later, after the new door’s window stops working (it’s kind of a SAAB thing), I called up, hoping my other door is still there. Nope, no door or window, and the sticker’s gone, too. Thanks a lot. Luckily, since I’ve had to fix SAAB windows before, I had a couple of spare parts sitting in the car, and I had that done in 30 minutes.

But then I did a math equation in my head and realized that my $1500 total repair ($1000-$1200 for the part caused by our friend) just cost me another 30 minutes onto 6 30-minute trips to the place and a who work-day spent hanging out. However, I also can’t see having our friend spend $500 towards the repair and get charged hundreds more for several years, or spending $1000 (or more) on a more reputable repair. Like I said, it’s kind of uncomfortable. As of today, the door, fender, and other door all look good. The door shuts fairly well. There’s only a small hint of air getting in past the seals. It locks. The window I fixed will work for a little while. But I noticed our friend is not getting her bumper fixed, and my car’s anything but perfect, and I might not be able to sell it without matching VINs.  I want to believe we chose the best compromise, using semi-professional, cash-only labor, but I guess you never can tell for sure in a complicated situation like this one.