Joining a Chamber of Commerce Near Milwaukee 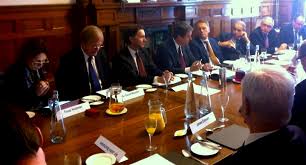 If you are a small business in the Milwaukee area, I’d love to connect with you personally, via the contact on this site or Linkedin. However, many of you are probably like me: weary of endless connections with people who don’t tend to send you business. In fact, even though I may be solvent after the first year of my business, none of the jobs in the first two quarters will have come from virtual connections. Rather, they are from real people I already know or have met who can see a vision of what my skills and abilities can for them individually.

With that in mind, I probably need to meet more people in person. My latest session with a SCORE counselor pushed me towards chambers of commerce. You apparently get to meet real people. My bigger problem is that it generally takes me a few meetings with others to really show who I am, but it might be a good situation. However, being a member of a chamber of commerce costs money, and I have been gun-shy about spending any of that on a business that seems to get most of its clients from people I already know. Again, if you’re a small service business, you know about this sort of thing, too.

I’m sure there’s a national standard for chambers of commerce, but I can only join one or two with the money I’ve made so far, so I will concentrate in the Milwaukee area.

In the end, I’ll probably have to look at lists of who is represented in my field in each chamber before I join. I’d hate to join a chamber with 50 members and five web design firms.

Other chambers I was unsure whether I could/should join include the Hmong and American Indian ones. I also got laid off from Menomonee Falls, so that one's not on my list. An intriguing one was the "West Suburban" Chamber of Commerce, which Google+ says is a mile away from my house but does not appear to have a website of its own.