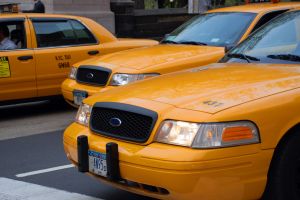 Two of my Facebook buds “liked” the Uber ridesharing/taxi service. I know one isn’t a driver, and I don’t think the other one is, but I assume they might have both gotten a ride, or maybe they like the idea of it. In fact, back when I was looking hard for a job, I put Uber and Lyft in my back pocket as something I could do if necessary. I mean, it’s just being a taxi driver using your own car. What could possibly go wrong?

Apparently, a lot, as our friends over at Buzzfeed discovered. Actually, I found out that despite what its name might imply, Buzzfeed wrote an extensively-researched article about Uber which has absolutely convinced me against rolling the dice with Uber, at least for now. Honestly, I like the idea of ridesharing or carpooling, and I'm probably still listed on the Wisconsin rideshare board, still waiting for the phone call to set up a carpool two years later. If it's really ridesharing, I suppose we shouldn't be charging money, but that's an argument for another day.

I’m just going to mention a few highlights from the linked article, since I want them to get most of the hits for their research. I did not conduct my own research, though I got far enough in the signing up process a few months ago to know that my 2009 Lincoln MKZ in black was kind of a preferred car, but not as preferred as a hybrid version.

Anyhow, had I signed up to be a driver, I apparently would have had some decisions to make about the registration and insurance on my car, and this is probably different in each state. I looked into using my veggie oil Mercedes or Suburban as a taxi several years ago, only to learn that they were both considered too old to pass as such in Wisconsin. I never even looking into the insurance, but apparently that would have cost me more than three times more than my current coverage. According to Buzzfeed, Uber is encouraging people to use non-commercial vehicles and not get commercial insurance. I can’t say whether that’s policy or not, but I can say that it is not a worthwhile endeavor if I have to make Lisa’s car commercial-only and pay, let’s assume, five times more in insurance.

The result is that people don’t do it. They don’t make their cars commercial and they don’t get commercial insurance. Uber has coverage for when passengers are in the car or when the car is responding to the app. However, it your real insurance company is not going to cover you at that time, won’t cover you when you’re waiting for a call, and will probably try to get out of covering you on the way to church with your family. On top of that, if you’re the one who gets rear-ended by an private driver in between jobs, you’ll have to sue the individual.

Stepping back (and shaking my head), I have to conclude that, as of right now, I’d be taking a huge risk as an Uber driver. I might want to or have to lie to the DMV or insurers in order to make a profit, and I certainly would have to be prepared to lie if I was involved in an accident. In fact, since these cats are all over the place, you better convince them to lie if you ever get into an accident with one who is in between calls. I shake my head mostly because I was hoping that there was a better idea, and it looks instead like American greed at its finest. I won’t even get into the shady leases. I don’t have to, since we’re to believe that a company is providing this wonderful service in mostly hybrid cars, but if drivers can’t afford taxi driver insurance, that means it’s either waaaay less than taxi service, or the huge companies running the show are behaving like huge companies running the show.

Frankly, whenever I get next to a taxi, I try to get away from it. Helena asked me why a while back, and I told her that they’re crazy drivers. And they sometimes are. Am I to assume these non-properly-licensed, underinsured UberXmen are going to be any better? And I can’t even see who they are, unlike the pizza or sub delivery guys? Probably checking his app for a future fare as he’s carting the current quarry. Hey, I’m not going to sit here and say I like insurance companies, and I can understand sticking it to them if you get the chance, but if Uber is providing more than a million rides a day (OK, that number is worldwide, but let's just assume there's a million rideshares a day total in America), then getting into an accident seems like pretty good odds. Actually, I know this is totally fuzzy math, but play along. If we drive about 3.5 trillion miles and get into about 6 million car accidents, we’re saying one accident every 500,000 or so miles, so even if each rideshare app ride was only a mile, that means the odds are that there are two accidents a day involving these systems. Yes, it’s spitballing, but insurance companies don’t spitball when they cancel you forever or wave goodbye as you get sued while they weren’t insuring you. Don’t worry, Independent Contractor, Uber will also be waving goodbye to you.