When you sight the Golden Gate, you’ll be approaching an experience you’ve long looked forward to. But in some ways it won’t be exactly as you pictured it.

The face of America has changed somewhat since you went away. It has come about gradually, so as almost not to be noticed by the folks back home. You’ll be the stranger who has been there before, and you’ll notice the changes. This little guide gives you a preview of  the world beyond San Francisco.

Maybe you’ve sensed it, and maybe not. Like it or not, you’re not exactly the same guy who left home so long ago. Combat makes a man more mature, settles his ideas about what he wants and how he wants it. Life far away from home offers plenty of time to think things out. You may be physically tired, your nerves may be a little shot. But there’s a new life ahead, a different life from the Army life, but in its way it’s just as routine.

We’ve all developed habits from the scheduled living of the Army. Some of the habits will help us to live better, for they’ve been developed under control, and controlled living will not cease when we’re discharged. Other habits, however, we may find advisable to get rid of before we hit home and mother.

You want to get back to normal? It may not be possible; it’s a different normal from the one we used to know. Many things are the same, of course; the beer parlors and the guys in them--but some of the boys will be missing, and it may be touchy to ask about them. The ice cream shops and the juke boxes and jump music and political rallies and 4th of July are still there, and there’ll be a tree at Xmas time. These are part of the normal you knew, and these things don’t change.

But there’s a new tempo to industry. Reconversion of wartime production to peacetime products which have been long lacking will be in full swing for a long time to come. People will be thinking and talking about ways to keep business in high, for the nation has profited by its experience in the great depression. Ideas like the prevention of inflation may hit you at every turn in the form of price controls.

Rationing you’ve known in the form of PX limits on tobacco and beer. But food and clothing may have be rationed for a little while--and don’t think you won’t hit the roof many times because you’ve left your ration book in the other suit. Even though the shooting has stopped, the effects of the war will remain. We’ve committed ourselves to big programs affecting the development of other nations, and to fulfill these promises we may have to get used to some controls over our own lives. We don’t want to get you down, but you want to know the facts.

There it is, the good old sod! Three thousand miles of the world’s best land. The world’s largest and most highly developed cities. Flat rolling plainland with miles of corn and wheat. Millions of acres of grazing land with millions of pounds of beef and mutton on the hoof. Majestic ranges of mountains. Fabulous deposits of copper and silver, gold and iron, and most of the metals you’ve puzzled over in the table of atomic weights back in high school. Cotton in the fields, in the bales, in the mills. Seashore and forested hills and long, wide rivers. The richest country in the world. That’s the USA and all this is as you left it. 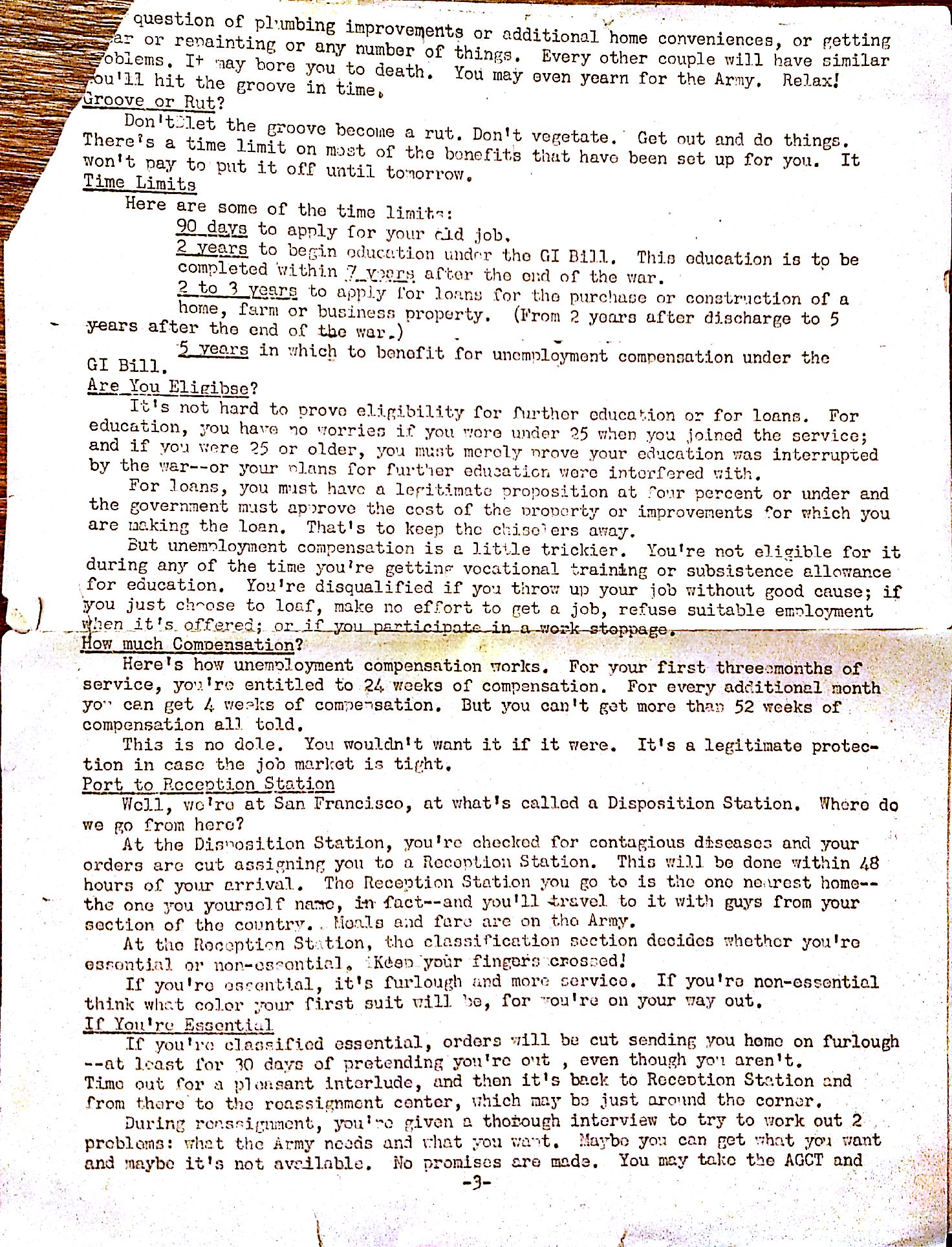 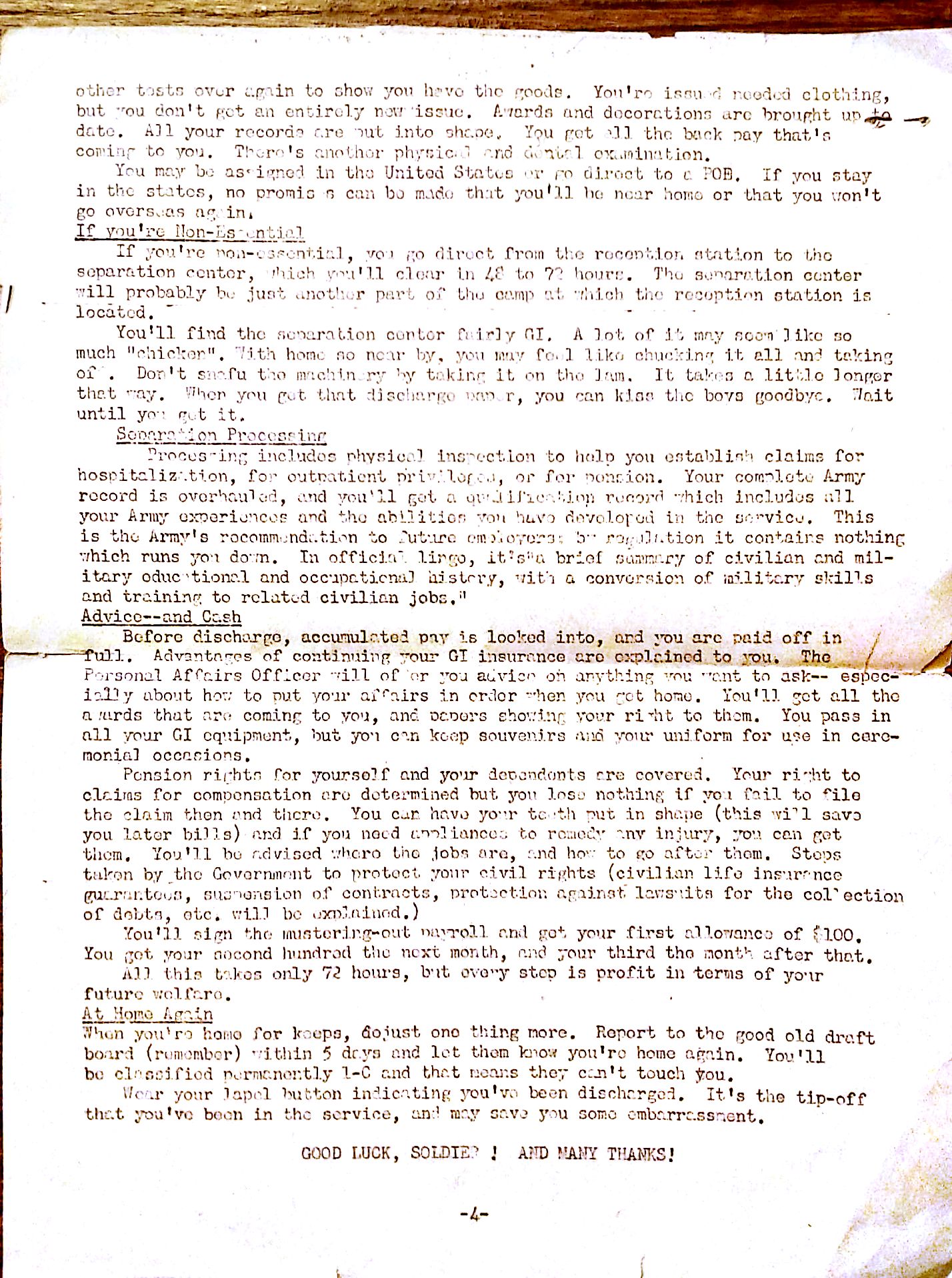