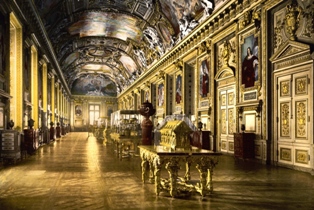 I don't want to be kidnapped and experience Stockholm Syndrome, unless we're talking Swedish Bikini Team and Old Milwaukee Beer. Nope, I learned about a French author named Stendhal today, and it's his syndrome I'm interested in. Now, much of his life seems very foreign to me, as he was a soldier, womanizer, syphilis sufferer, syphilis home remedy sufferer, and a "dandy and wit about town." He even took on Stendhal (the name of a town) as a single name nom de plume, like if I became Brookfield or Wauwatosa. Interesting person as a whole, but it's his "Stendhal Syndrome" that piqued my interest the most.

Maybe you've experienced it and can tell the rest of us about it, but I don't think I've quite had it happen to me. Not quite, but almost, and not in America. It happened to Stendhal when he was in Florence, Italy. He felt so overcome by cultural richness that he was having palpitations of the heart and felt like he was going to fall to the ground. The Stendhal Syndrome was later diagnosed and named by an Italian psychiatrist, but is it real? Have you felt it?

Being from Wisconsin, I know there are some of my fellow Cheeseheads who might claim experiencing this syndrome at Lambeau Field, and I don't doubt they believe they are experiencing true cultural richness. However, most of the civilized world might not believe the moment to be as life-changing as do Packers fans. It does raise the question of interpretation: one man's Mona Lisa is a another man's Dog's Playing Poker.

Anyhow, my own experiences were not sports-related. I felt something similar to what Stendhal described while at the Louvre in Paris and at the Vatican in Rome. At the Louvre, I can remember not knowing what to do as I looked down a long hall with nothing but classic paintings. At the Vatican, I recall stopping a couple of times and almost seeing myself from the outside as crowds of people moved around me. Lisa says she's almost experienced something similar outdoors, but she almost implied she thought I was exaggerating my own descriptions. You can research the syndrome more if you want to find out if it's linked to sporting events or hanging out in nature. As for me, I'd like to believe it's felt when the weight of hundreds or thousands of years of human culture or religion come crashing down on a single, unprepared individual. I suppose it's a bit like a linebacker crashing into you, only in a mostly good way.

Side note: research indicates the Swedish Bikini Team was made up of American models and Old Milwaukee Beer was not being made in Milwaukee at the time of the iconic commercials referenced in this article, not to say American supermodels in bikinis with Detroit-made beer are any less desirable as kidnappers.