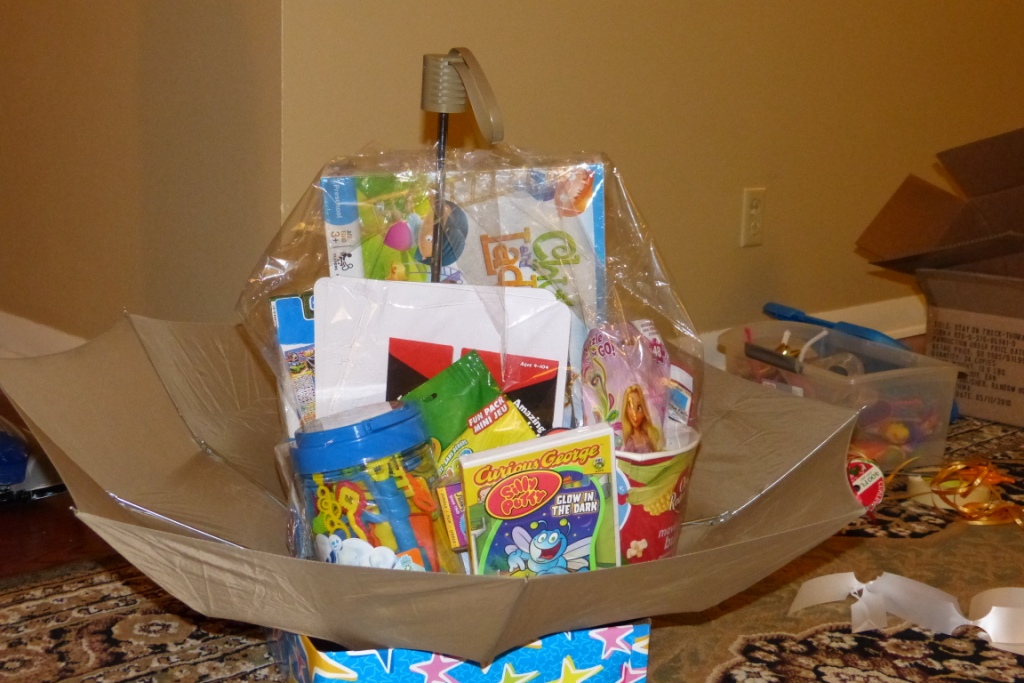 Talk about a niche project, but if you get recruited to create an auction basket that happens to have a "Rainy Day" activity theme, here's an idea that might make the basket a little more fun: try an umbrella.

Here's the deal: Lisa received a request from James's room parent to put together the church auction basket of items donated by the kids in the class. She said it was to be a rainy day theme. The catch was that the basket she had was not big enough. Lisa had just donated all of our extra baskets to Helena's school for her auction, so we were left to either buy a $20 new basket, buy a $5 used basket, or get creative.

As soon as Lisa asked, I had the idea of using an umbrella turned upside down as the basket, which had to be fairly big because one of the donated items was a board game. She sent me out to Goodwill to get a basket or an umbrella, leaving the final decision to me. The biggest basket in the store was a $5 one, but it was kind of non-traditional because it had side handles. However, I was able to find a nice umbrella for $2. (A side note about Goodwill: it's busy as all get-out on Sundays, which might be because they get so many new donations on Saturdays, or it's just when people like to shop there with the whole family. Also, you've got to look around, as there were three separate areas where I found umbrellas, and baskets holding items all over the place.)

Anyhow, I decided on the umbrella. Lisa had bought a shrinkwrap plastic bag that did not fit around the umbrella, so she went and bought a $15 roll of cellophane. That was not my idea of a good idea, so I decided to take the handle off the umbrella, pierce a small hole in the shrinkwrap, and use it in the center of the umbrella. Lisa acquired a box in order to use as a more stable base, and voila. While an umbrella is not as sturdy as a basket, it's certainly themed correctly, and it is usable after the purchase. We'll see if it holds up and if the uniqueness gets higher bids.