SUV Made In USA For Our Family - It's Complicated 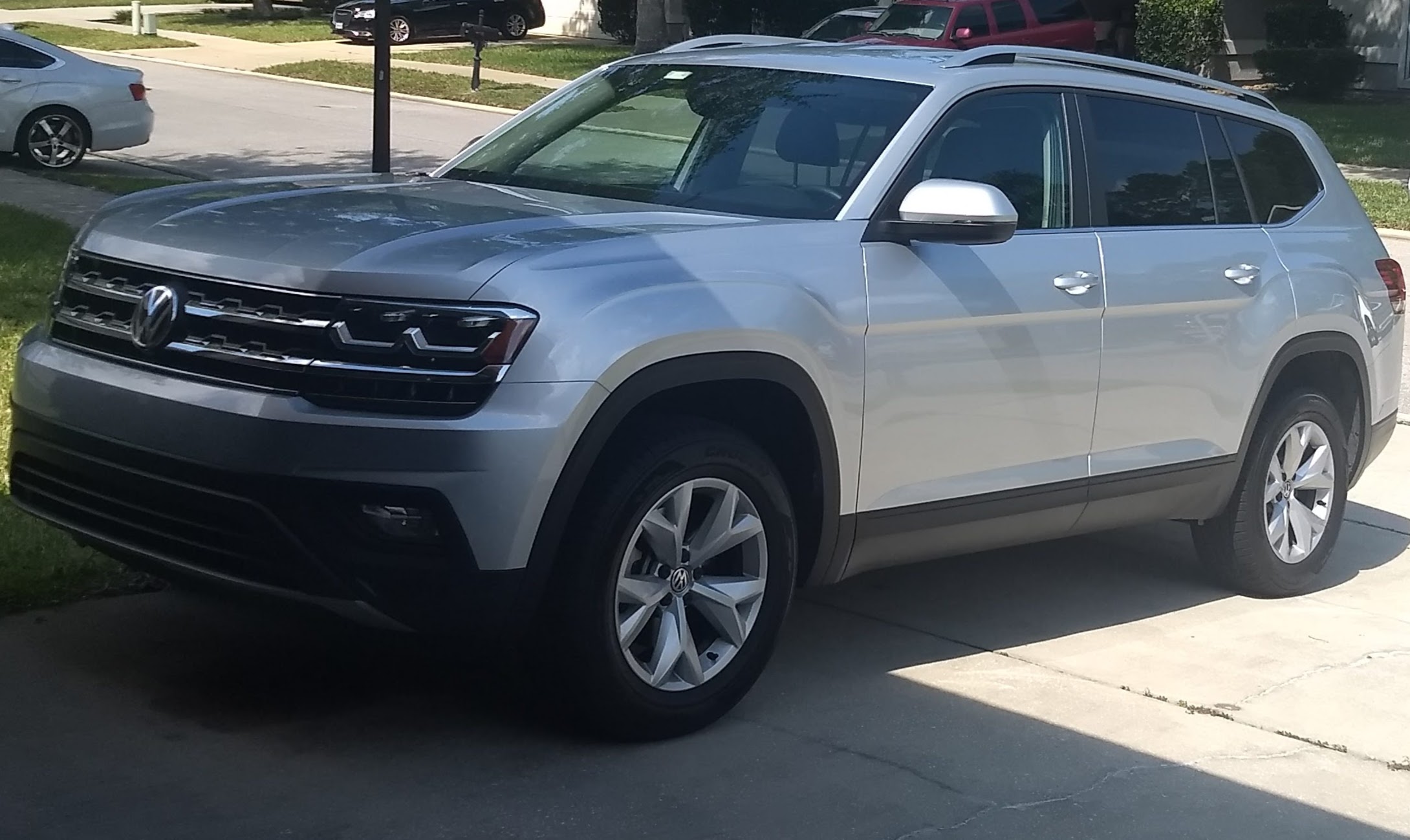 When I was in the market for a new vehicle, one factor that actually did make a difference to me was where the car was made. Some people might be surprised by this, as I’d recently bought used Saabs and Mercedes Benzes. But with a NEW car, and during a pandemic, I wanted my money to support fellow Americans. The only problem is that there is no definitive guide that takes all of my concerns into consideration, though there are a few data sets that can help consumers make a decision.

I ended up choosing the Volkswagen Atlas, and it’s actually in the top half of American-made cars based on the American University Kogod School of Business Auto Index. Some of that index is subjective, so you can also base your decision solely on location of final assembly (Tennessee for the Atlas) or percentage of US and Canadian parts (47% for the Atlas). 47% puts it in the top ⅓ of cars sold in America for actual American parts.

We’re looking at my view of my own vehicle, so you can check out your own car with your own conceptions in mind. VW was awful with the Dieselgate scandal. Luckily, it didn’t kill anyone, and I’m willing to forgive and forget, especially if it means getting one of the best warranties around in my 2019 vehicle (purchased in 2020). I get 72 months and 72,000 miles, which is a good new car warranty. In fact, it’s one of the best for any car with so high a percentage of American parts, and basically double the competitors for my money, like the Ford Explorer or Chevy Traverse.

The V-6 Atlas has a slightly lower Kogod score than the 4 cylinder turbo version, but I could not find the trim I wanted (SE with Technology) that had a 4-banger, rated at 50% American. The fact that the corporate headquarters is overseas detracts from the score, but I’ve seen what Chevy and Ford execs make, and I don’t really care if my money goes to rich Americans or rich Germans, as long as factory workers in America benefit. When I read that the folks in Tennessee played a big part in the design of the Atlas, I was a bit more sold on it, since that meant more Americans beyond assembly line workers played a role.

Someone might get on me right now about the difference between union and non-union workers. I don’t really care. When my teachers union in Wisconsin lost all its power, it turned its back on me. And the UAW didn’t do anything for me then, either. And a fellow baseball player in another union said teachers all drove foreign cars (which is why he didn’t support my cause), so don’t get me started on unions in practice. In theory, I like unions, but I am certainly not going to buy any car based on UAW affiliation, which is probably a typical American point of view.

Still, I wanted to benefit Americans if I could. But I also wanted a mid-sized SUV with a decent warranty that was going to have 0% financing over six or seven years. I also wanted a real new-car warranty rather than the 3yr/36,000 mile joke offered by most brands. All this led to the Atlas for me, with its 47% American parts and final assembly in Tennessee, along with a 72month/72,000 mile warranty for 2019 (even if it changed in 2020), and 0% for 72 months to pay it off (while still under warranty). It was just the right deal for me at the time, but I also wanted to see how American it was of me to make the deal.

First off, I did benefit the local dealership, even if they lamented my desire to talk them down. My God, you are almost out of business, so just sell me the car at cost already. It gets a little more murky after the stealership as to how much Americans made off my deal. The Atlas is rated at about middle-of-the-road for cars sold in the US as to its economic impact. If you base it on just the parts (47%), it’s about 170th out of around 570 vehicles, but if you weigh other economic factors, like where the HQ is and where the major components of engine/transmission were produced, then it falls to below 200th place of the 570 vehicles. The college that studied the numbers claims my Atlas is tied for 53rd position out of 106 official positions, but it also admits a lot of people might argue with methodology. Either way, it’s not the most American-made vehicle out there, but it’s also not the least.

With my options of wanting a 3rd-row vehicle for under $40,000 and a decent warranty that was mostly made in America, here’s how my Atlas stacks up against other American vehicles for 2019 (note that Kia and Hyundai added models for 2020 not on this list):

--Mazda CX-9 0% American and tied for last place (106) on list of American impact. I never really considered a Mazda, but it is ranked well by journalists. 3/36k warranty.

++Dodge Durango 62% American and tied for 29th place on the list. 3/36k warranty. Options I wanted probably would have priced me out.

-+Kia Sorento V-6 is also 47% American and tied for 53rd place on the list (same as my Atlas). The 4-banger is one of the most American cars out there, but not what I would have chosen. Maybe my next car will be a Kia, but I still can’t do it yet. Solid 5/60k warranty.

++Honda Pilot 65% American and tied for 14th place on the list. As American and boring as baseball. 3/36 warranty but good reputation and resale.

++Chevy Traverse 54% American and tied for 27th place. Slightly more American than my VW and very similar in size. My negative experiences with GM and a weak warranty of 3/36k made my decision for me.

--VW Tiguan 1-3% American and tied for 103rd place at its highest. The 2019 Tiguan would have had the same awesome VW warranty (6/72k), but I would have had a vehicle barely made in America with a tiny 3rd row seat.

++Subaru Ascent 50% American and tied for 50th place. Another 3/36k warranty in a car that is probably going to last much longer.

++Toyota Highlander 65% American and tied for 14th place. I am sure it’s a good vehicle, and it’s as American as any other SUV out there, so YOU should go ahead and buy it. And lots of you probably will. 3/36k warranty, so hope it lasts, since it’s ranked as the worst new car warranty in the business.

++Ford Explorer 50% American and tied for 12th place. It would have been hard to get the Explorer just before a big redesign and a typical American 3/36k warranty says a lot. Recent transmission problems and a slightly bad taste from my last Ford kept me away.

++GMC Acadia 54% American and tied for 9th place. As American as the Traverse but not as pretty, and it’s still a GM. I really wish that wasn’t a rip, but it is.

++Nissan Pathfinder 55% American and ranked 28th. It’s more American than my VW but has one of the worst 3/36k warranties and is often ranked low in reviews.

--Toyota 4 Runner 0% American and tied for last at 106. You’d think an off-road Toyota would have at least one American part, even if it’s not the 65% of the Highlander. 3/36k warranty on all those Japanese parts.

--Mitsubishi Outlander 1% American and nearly last at 105. At least this low-rated vehicle has a 5/60k warrant, so even if all the reviews are right, at least you can get it fixed for five years.

--Dodge Journey 35% American and ranked 61st or 69th depending on trim. Even though it’s ranked near the bottom of most review lists of 3rd row SUVs and probably smaller than I wanted, I still considered the Journey. I guess I would have liked for it to be more American if I was going to bother. 3/36k warranty is not great, and most styling options seem to place it squarely in the trailer park.

The rest of the 3rd row SUVs out there are priced well over $40,000 or not available for 2019. I think the basic takeaway is that you've got about a 75% chance your 3rd row SUV is going to be 50-65% American. But this is the United States of America, and most of us are a mix of nationalities, just like the vehicles sold here. If you are into the made in America thing or believe buying American is going to make America great again, then at least take a look at the sticker inside the door that gives American content percentages. Don't assume because there's an ad on TV from  Korean or Japanese or German or American automaker claiming a vehicle is made in America that it actually is made here. Figure it's about half made here, if you're lucky. If you want the big bucks to stay with American executives, then make sure to buy Ford or GM--even Cadillacs made in Mexico still help pay the CEO. And I'm sorry this is two years late for those of you who bought 2019s back in 2018, but I was specifically looking at 2019s in 2020 because they had the same incentives from the manufacturer along with more incentive from the dealer to get them off the lots.

Some additional thoughts. I could have also gone with a minivan, and my mom's minivan of choice is the Dodge Grand Caravan, which has more American-made parts than any other vehicle on the list (yet still is only ranked 24th).