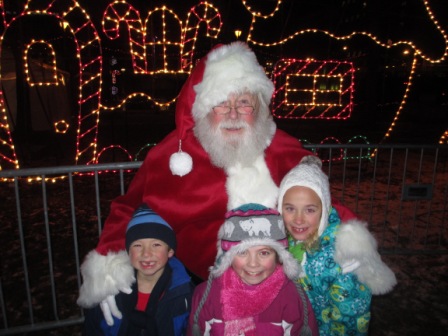 I’ve lived in Milwaukee for nearly forty years, but I’d never been downtown for the tree lighting and light lighting events. Well, I’ve still never seen the tree lighting, but I feel like I have enough experience with the Milwaukee holiday lights festival kick off extravaganza and the Best Christkindlmarket Milwaukee in order to give some advice to someone else searching for information about the events next year.

The original plan was to pick the kids up from school and get to the tree lighting at Red Arrow Park, maybe after eating gyros or bag lunches in the car. The problem was that the temperature was predicted to be less than 20 degrees, so we were unsure whether to keep the kids outside from around 4:15 until whenever the holiday lights would be lit (the website claimed 6:30, but I think we were at Pere Marquette Park closer to an hour). However, even 4:30 - 6:30 would have been a long time to be outside in the cold with three kids (Helena had a friend along).

We were excited to learn that Best Place at the Historic Pabst Brewery was having “Milwaukee’s first” Christkindlmarket. We got there right around 4:00, parking two blocks away and feeding a meter until 6:00 ($3.00). Unfortunately, even though their plan was to capitalize on the kick-off events, Best Place and the vendors were just getting set up when we got there. The layout was large but rather confusing, so we spent about ten minutes getting acclimated to the slightly odd setup. They had four distinct and mostly separated areas for customers:

We spent about an hour and a half at Best Place. I got a free beer because they had tapped the keg. The guy who was dressed up like a king (think the Burger King King) also came into the bar next to the gift shop and handed out free root beer and beer, which meant everyone in our party had free drinks, though neither Helena preferred water to Sprecher root beer.

The reason we were eating in the bar next to the gift shop was because the main hall had only adult standing tables set up and the only food. The kids were too short to stand and eat. People who like to show up at events like this and just sit down were busy sitting in the benches available, so we had to head outside and down the block back to the seating area. James fell down the stairs on the way and dropped his schnitzel, which sounds funny but made him cry. It was perfectly nice once we got there, but we had cold food, which Mader's didn’t seem to have heated enough to begin with, and which set us back about $22 for two adults and three kids.

Overall, we weren’t looking to spend money on vendors but they were there. We missed Father Christmas because we were leaving, but that might have been fun. The storyteller was a nice touch for the kids and the free drinks made it affordable. However, the odd layout and overall stress made it only a partial recommend. I believe that if it happens again in the future, the management will likely make some key seating and arranging changes based on this year, and they’ll probably hope for temperatures in the 50s so people can hang out in the courtyard with food and drink.

We left 9th and Juneau at about 5:45 and needed to get to 3rd and State for the start of the extravaganza. I was surprised that we seemed to be the only group leaving the one venue for the other, but maybe there were a few others. We made it to Pêre Marquette Park just after 6pm, and we got to watch pretty much the whole show, which was a mix of singing and cheese, which is probably just about right for Milwaukee. The MC was a fancy lady who seemed to think she was in some fancy town back east (think Gilmore Girls). Lisa and I were hard-pressed to know whether she was serious or acting, but she was entertaining nonetheless. Billy the Brownie and Tommy the Mayor were also cheesy and fun additions. While I did not understand the Mexican dance squad, the rest of the show was fun, free entertainment. Speaking of free, we each got a cookie and hot cocoa, which was just about right after our meal. We got pictures of the kids with Santa. A lot of people hopped on the free Jingle Bus ride, but that would have been another 40 minutes, and we needed to head home with the kids eventually.Oh, and speaking of a lot of people, we were actually surprised at the fairly sparse attendance. Maybe it was because of the poor weather, but I'd say the park was fairly empty considering it was a decent free show.

While Lisa and the kids walked over to see the tree in Red Arrow Park, I ran back to get the car, and I did run part of the way because it was getting cold. I picked them up and then we headed to Cathedral Square to check out the lights. It was nice, but the kids weren’t too interested in the trees decorated by other kids. The animated lights at Zeidler Park provided a nice, hidden surprise before the car ride home. Lisa put 95.7 back on the radio so we could listen to Christmas tunes on November 20th, and we had a pretty good evening overall for $25. Oh yeah, we were home by 7:30, so we were able to get it done on a Thursday instead of a weekend.

I do not want to make it seem like we spend $25 lightly. I am currently unemployed, and while I did spend all of Thursday working on job-related endeavors, we needed to eat supper and we weren't sure three kids in the back of the car with bag lunches would work out. For events like this in the summer, we would almost always bring our own food and maybe get one item to share.