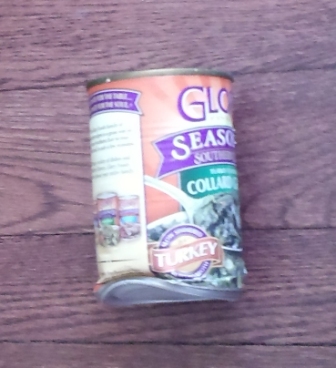 When a can of collard greens hits the roof of your house and then drops onto the front walkway, it’s kind of a disconcerting situation, and you look for explanations. That’s the situation I am in right now. Amid constant construction noise two blocks away, a very loud thump hit our house at about 3:15 this afternoon. When I went outside to check on whatever animal divebombed the roof, it was a can of Glory Seasoned Collard Greens.

While this is probably not an isolated occurrence, and I’m sure you know someone whose house has also been pummeled by canned goods, I do wonder from whence the bounty came.

I have to admit that option 1 and 2 are the local teens/college kids. I know young guys can be turkeys. However, I can see the one college kid right now, in his window, on the phone, in shorts, and he’s too lazy to shovel, so I assume he’s also too lazy to get bundled up and throw canned food at my house. The other kid has some goofy friends over once in a while, but I don’t see any of them over there now, and none of his friends could throw a 14.5 ounce can of nutritious food onto my roof from across the street. So, if it’s either of these culprits (or any other random young man in the area), then it’s some kind of launching device.

I’ve seen potato guns in action, and I assume one could be fashioned in order to house a steel can as ammunition. The biggest problem I have with this theory is that it takes the local numbnuts kids and makes them into malicious vandals. I have yet to check the divett in my roof, but it may need repair, and for it to have come from a backyard of one of the neighbors, we’re talking about 100 yards of traveling at the least before it came down and smashed my roof. Physics teachers and rednecks alike can attest to the destructive capabilities in the mentioned scenario. I hope it’s not this option, and I hope they stop if it is.

My parents have been helping us out with grocery bills as I begin my own business, but it seems like too much trouble to enact such a practical joke, either by them or some other friends who know we are currently struggling with money, especially since the can was probably only ten feet from crashing through our front window. If it’s not someone who wants to help us, maybe it’s one of our enemies.

As I start out as a web designer, author, and educational consultant, I imagine others who do the same work in my neck of the woods might realize they are ill-equipped to compete with my superior abilities. I could see them wanting to send me a message to stay off their turf through intimidation. However, a can of collard greens with no message attached is not exactly a drive-by shooting. Probably not, I’m guessing, as it’s not exactly Dallas, and I’m not J.R. I don’t believe we have any other enemies. Regardless, if someone was trying to send us a message of some sort, it failed.

Once you eliminate the most likely scenarios, then you can start to imagine the really stupid ones. For example, with all of the construction going on, what if one of the cranes or other pieces of heavy machinery launched several cans of collard greens that should have been served at lunch, hitting houses in every direction? Further, what if it was thrown by someone riding the city bus, which is now forced to drive down our block? Or, it could have been part of some odd rain event, like when it’s rained fish. I guess if we’re really grasping, the racoon who had been living in the attic…

Anyhow, I’m back from outside, and it’s not very funny at all. The collard greens obviously hit the heater vent chimney thing we have on the roof. It has a big dent in it. Looks like a low angle, like it was someone throwing from the sidewalk in front of our next-door neighbor. Cousin Jason says if it’s a spud gun that the can could have traveled up to a quarter mile at 75 mph, and that could place the culprits across Blue Mound. Whether aimed or not, it went directly at our house: malicious, criminal, and disturbing. Unless it’s my competition. Then it’s just sad, and Passive Ninja Web Design will destroy your inferior web design companies (but not violently).