Review of Uhaul, Budget, and Penske Rentals - When Something Goes Wrong

This is not a review of the truck rental company rates. You should navigate to each of the big 3 websites in order to get an idea of what it will cost to rent your truck. I do know that the prices went up at certain times of the month and as the time got closer to the date needed. In that way, truck rental prices are kind of like airfares. Keep this in mind when you’re closing on a house, since you might have more leeway than someone who rents and needs the truck at the exact end of the month. This review is about what happens when something goes wrong with your rental. It’s about what the three major rental companies (Budget, Uhaul, and Penske) will do for you after it’s all over. If my experience is any indication, something will go wrong, so it’s good to know who stands by their product. I’ll explain each problem I had, what I did afterwards, and what each company did for us.

Uhaul
Our Uhaul truck from Milwaukee to KC had a bad air conditioner. While the weather was not unbearable, it was summer in the Midwest. This was a two-day trip, with the truck being parked outside one night. The second day of driving was worse than the first. I believe Uhaul also still has my walkie talkie somewhere. That’s more my fault for leaving it in the truck, but it’s also a loss. I did not mention the device in my complaint because I was not sure it was missing at the time.
I wrote an email/contact form to Uhaul explaining that the truck lacked a working A/C. I suggested that the freon maybe was refilled after the last renter complained and drained out as I drove. I asked for something to make me feel better about the inonvenience.
Uhaul sent me a $30 gift certificate. At first, I had no idea what I would bother to get from them again, but it ended up saving us when we moved the next year. I bought $30 in Uhaul boxes that really came in handy. Maybe it’s standard Uhaul procedure to give around 5% back for a complaint, but it was something. And maybe the company reminded its staff to fix problems rather than cover them up.

Budget
My Budget truck from Milwaukee to KC also lost its air conditioning charge, too. I drove this trip in one, single, hot day. It got better as the sun went down. This truck never had A/C on the second day (after loading it), so I knew from the start that it would be a torturous journey in July.
I wrote an email/contact form to Budget expressing my disappointment. It was similar to the one I sent to Uhaul because the problem was basically the same. I still think these companies do fill these up with freon in order to avoid real fixes. That’s the kind of thing a dishonest used car salesman does.
Unlike Uhaul, which apologized and offered compensation, Budget sent nothing. I spent an entire day in a vehicle that was supposed to be air conditioned, and they simply ignored me. I assume that Budget is fine with refilling freon lines and, really, not fulfilling their contractual obligation to the renter.

Penske
I’d heard great things about Penske being the one to go with if you could. Trucks were newer or better somehow. I don’t know, but maybe the same internet trolls who swayed our recent presidential election post comments about Penske, since this was the worst experience of the three. First off, they changed the rental on me. I was supposed to get the truck at the Penske shop, but that truck had a Check Engine light come on, so they sent me to Home Depot. Home Depot, of course, did not know I was coming, so I wasted time as the people there readied my truck. I took photos of the truck, noting a missing light and dent that was not in the condition report. This trip was from KC to Jacksonville, FL, and the family rode in a separate car, so we took three days. Luckily, the air conditioner worked the whole time, so props to Penske on that. I was fully prepared to give Penske good reviews as we unloaded the truck in a rain storm. Even after the bumpy start, it had done its job. And then we got to the back of the truck. The entire back row, and some of the row before, was soaked. Ruined books, wet clothing, electronics that will likely start to rust. Lisa lost entire teaching units. We wasted more time trying to dry off what we could. It’s hard to estimate how much was lost, but I know one history book I’d won back in high school (and still in perfect shape), was over $50 alone. Some of the books were unique finds that looked old but are irreplaceable. Basically, we’re talking about a loss about as big as maybe half the amount we paid for the rental. That’s being honest with how much stuff is worth now. If we’re talking replacement costs, it’s probably twice the rental amount, since, like I said, we probably have some electronics that will die early.
I sent Penske an email/contact form. It was ignored. I figured the company would come back with some statement about how the truck had damage that was not charged to me (I was ready with my photo evidence to show the damage was not mine). But Penske didn’t even bother to acknowledge the complaint. I am providing some photos and video of the roof leak in order to show you why you need to avoid these trucks if you’re move may include some rain.
All told, I’m going with Uhaul from now on. Maybe the trucks are falling apart more than Penske’s or Budget’s, but at least Uhaul knows that responding to a customer who has a complaint is the right way to run a business. Of course, I will update this review if either Budget or Penske decide to contact me with even an apology. 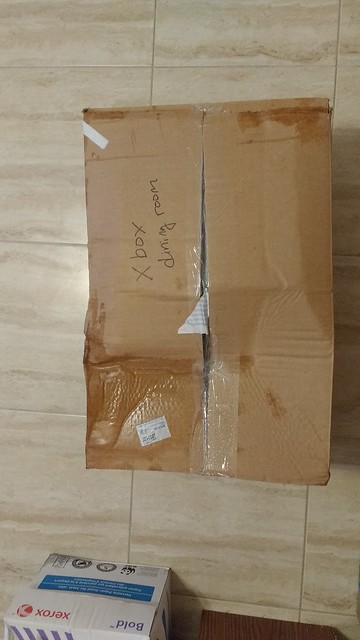