Many years ago, I opened bank accounts for the kids. I started CDs and savings accounts that get checks from grandparents added each year. However, those accounts mean almost nothing to the children. I show them once a year what their balances are, as well as the meager interest rates they get on their investments. I also mention how I get to pay the taxes on their earnings along with the rest of our family taxes. The bank sends them nothing, and they don't really have any control over or access to the accounts.

When I learned about the LCEF investment options for kids at a recent LCMS new workers conference, I was surprised. The rate at the time was three times higher than the best CDs I have for the kids, and there were other rewards with the program, including an added bonus for good grades. Both kids get good grades, so why not get paid by someone else for them? It's kind of the idea of a scholarship but more immediate. As a parent, I've never given them any extra money for grades in school, but I don't mind if it comes from LCEF. They can earn more for community service, too, which I've also never rewarded beyond saying I was proud of their efforts. There's also a bonus for signing up, so that's more free money for them. It's kind of like the bonus you might get when getting your own checking account, except it's for them. Basically, the kids earn rewards for doing what we've always taught them: give to others, get good grades, and be good consumers.

The part that's more important to me is that LCEF tries to do more than banks or other investment websites in educating the kids. It keeps them involved in the process of earning the money with an activity center and birthday cards. Our kids would be in the Mission Builders group right now, but they can also become part of the World Changers at age 13, getting a debit card at 16 and a possible scholarship at 18.

One part about this program that's disappointing is that I did not know about it sooner. We've been LCMS church members as a family since 2003, and I've been going to an LCMS church since birth. I even learned about ways that getting members of churches to sign up for accounts can help earn credits for loans that churches have with LCEF. I'll be looking into that one some more, since I do not know the financial situation at our church as well as I should. And unless you're on some kind of board or council, you probably don't, either. My last church was in debt up to its pipe organ (literally, since that was the main debt culprit), and the church before that was still paying off two additions while adding another one. If everyone at church getting savings accounts with LCEF can help to reduce this debt, that might be one less capital campaign to have to ignore, so I'm all for it.

Now, what's the catch, right? While it's not really clear, the documentation implies that many LCEF accounts are more like CDs or money market accounts at other banks. I'm not a financial advisor, so don't listen to me on this one. But the return rates are high, and it's not a traditional bank, so I'm going to look at the kids' accounts as longer-term than a kid checking account. But what 10 year-old needs a checking account? I'm also not sure if the rate of return is guaranteed in any way. It also looks like the LCEF "reserves the right to assess maintenance fees." You'll want to ask about how all that works. The maintenance fees I saw online were not for paying financial advisors but for things like copies of checks or bounced checks--pretty standard.

A normal CD is set at a rate for the first term, and then it usually drops to market rate after that, and those introductory rates are long gone on my kids' other accounts now. Make sure you know exactly what's being offered when you sign your kids up, and make sure you take advantage of all the extras offered to your kids and maybe your church. The Young Investors account seems fairly liquid, but it's really hard to nail down. And the 57-page circular was no real help, partially because it was 57 pages.

Another problem, especially if this type of form is being distributed to parents at your LCMS school, is that there's no clear way how to get the initial money into the accounts. The form offers a monthly deduction option, but it does not say how to send in the intial amount. I wanted to send the money from their old accounts electronically, but I don't want to send it monthly. And the form does not say I should write a check or who to make it out to if I do. There's a place to add an account number, but it really seems to be more about monthly investments. I read the form twice, and I'm a smart person, so my final assessment would be that it's meant as an application only, and not as the application and investment. Again, the form should say that if it's the case. I could see a lot of people getting confused and just giving up. That's silly, and I spent another 20 mintues trying to find the answer on the website. As a business owner, I try to make it easy for people to figure out how to give me money. This is not something that should require an hour of reading through documents and an eventual phone call. After the phone call, the answer is to write a check to LCEF for the money. I know, it's my fault for not just calling sooner, but I sign up for bank accounts at all hours / when I get time.

Keep in mind that there are also limits to the high rate for kids accounts, and there are also limits for who can sign up, so make sure you're eligible. If you have no association with an LCMS church or school, or you already have $1 million invested for the kid, then you probably want to invest elsewhere. This account has a high interest rate for money up to $1,000, which is perfect for my kids, but you might give your kid $1,000 for Christmas each year. For the rest of us, if we can figure it out, this is a good option for the kids.

I have heard that since the initial deposit can be low, a church or school member might want to set these accounts up for all the kids. I think that's a cool idea, but the parents will have to understand that the enrollment form requires an SSN. Actually, I could see doing this sort of thing to help promote my own website design business among school parents.

I looked at my bank account to find the initial investment had been cashed. However, I did not receive an email, text, or other confirmation. My kids didn't, either. I guess this means it's really old school, so I'll get my account info through the mail or via telegram. I've just gotten used to setting up accounts online, transferring money into them online, and getting instant confirmation that my money is where it's supposed to be, along with online access to those accounts. I went to the website just to see if there was a way to sign up, but it seems like that's not the case. It's kind of weird just trusting someone with my money. My kids' money, I guess. 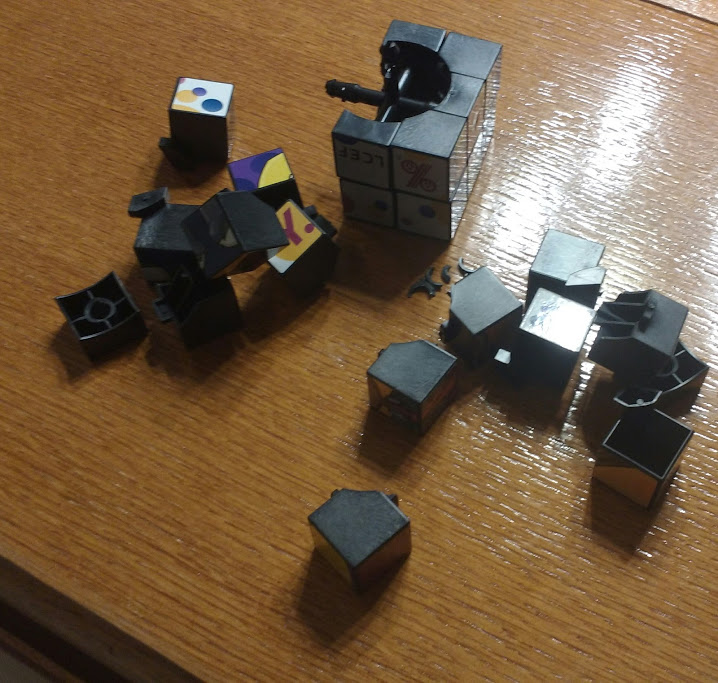 We received boxes with some materials for the kids. Activities and a Rubik's Cube-type toy. Both of these cubes fell apart in the kids' hands as they opened the plastic bags. I tried several times to put them back together, but I'd say it's a manufacturing flaw. It's sad because the kids were kind of into getting another cube, saying they weren't going to "mess these up." The saddest part is that shipping ($3.18) probably cost more than the cubes did, and LCEF has probably shipped hundreds of these flawed cubes to all kinds of disappointed kids (whose parents probably don't bother to complain about a free gift). My daughter agreed she'd have been happier with a pen that worked rather than a broken toy.

The box did NOT contain any online banking information. In all, I have a piece of paper with an account number and a deposit slip. No bank to go to, no checks to write, and no online access. That said, it's a long-term savings account, so I won't be able to tell you how well it worked out for several years. However, I'm a bit apprehensive of transfering the rest of the kids' money into this account. I have spent about another thirty minutes trying to figure out if I can login to the accounts online. My flyer says there's online account access, but I'm lost as to where online--probably have to call again. This is so old-school that Kevin Bacon would anger-dance about the whole situation. The good news is that I have faith LCEF will take care of my kids' money.

I also explained to our daughter why it's good to invest her money with LCEF. She liked the idea that her money would be used to help out other churches and church workers with loans. Both kids liked the idea of money for grades, too. I really don't want this article to sound negative. Moving money around always results in some frustration, and the benefits of the LCEF YI program far outweigh the questions I've had. Now that you've read the article, you'll better know what to expect, so you'll be able to see the reasons why you should invest your kids' money with LCEF.

We received the first month's statement for ONE account. I hope this is just some weird quirk with timing, like one account was set up just before the end of the month while the other was set up a day later. But it's strange to not have a bank to go to and then not have a monthly statement to say the money exists somewhere. This could totally be my fault, since I could see me writing an old address on a form. However, both kids got the welcome kits on the same day, and both were sent to our house. There was no information about setting up an online account in the first statement, so it looks like it will still require a phone call if and when I set it up. On a side note, I just set up my online account for life insurance after having the account for ten years, and now I get daily marketing from AIG, so there's an argument for leaving well enough alone.

The accounts are all somewhere and making money. The kids also got their money for good grades. This is all good stuff. However, I tried to set up online access, and that didn't seem to work out: I filled out some kind of form, then got a phone call from LCEF (telling me it would take a few days), and then nothing. Maybe I have access, maybe I don't, but I didn't receive another phone call or an email or a letter in the mail.