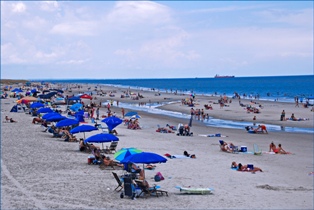 Did you know that there’s a potentially dangerous hydrogen bomb buried near an American vacation destination and that it’s been there since 1958? Technically, it’s buried in the Atlantic Ocean somewhere off the coast of Georgia, and thought to be near Tybee Island.

I guess that it’s not a huge priority to find it, even though a 1966 report refutes the Air Force claim that the bomb did not have a “nuclear capsule,” or trigger. I’ll assume the lost Mark 15 bomb was the 3.8 megaton variant, which means that there’s a lost bomb right off the Georgia coast near Savannah that might have the explosive power of nearly one megaton MORE than the entire explosive power of ALL bombs used during WWII, including the the two that we dropped on Japan.

In case you’re wondering how the bomb got lost there, it was a mid-air collision over Tybee Island. No one denies the fact that there is a bomb out there somewhere, just how much of a problem it might become. Apparently, it’s better if the bomb stays buried under sand, so if you’re ever vacationing in the area, and you find something big with the old metal detector, leave it alone. Again, the Air Force and Wikipedia and probably most non-conspiracy theorists say it’s nothing more than a big conventional bomb without the nuclear doohickey. The other problem, or potential for cheesy movie ideas, is that if the bomb corrodes enough, highly enriched Uranium could leach into the water and make all of the animals huge, vicious, and able to defy all laws of physics. Or it would kill a bunch of fish.

The other thing I learned was that in 1966, when that report came out saying it WAS a real nuclear bomb hanging out off the coast of Georgia, the report apparently said it was the second such lost bomb. What? We’re not talking about those handheld dirty bombs you’ve seen reported on by 60 Minutes. These are like the size of a Beluga Whale but twice as heavy. And how many were lost after 1966? I told myself I wasn’t going to search, but I did, and there are apparently eight missing American nuclear bombs. Of those 8 (and they don’t count the Tybee Island one from this article because it may not be nuclear), three are in America. Two are in North Carolina, not even off the coast or anything. Two 24 megaton bombs. I guess I wonder how many the Soviets lost...There I go again, and after more quick research, there might be around 50 missing nuclear bombs total. Is it enough to completely blow up the earth or change its orbit if they all went off simultaneously? Sounds like we might need a Bruce Willis movie to find out.